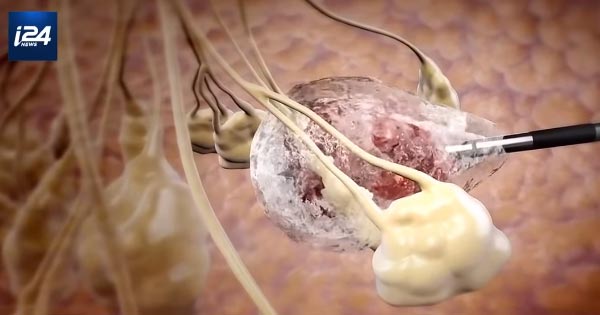 Ice Cure Medical, a northern Israeli company based in Caeseria, has developed an innovative technique that freezes cancerous tumors. According to Ice Cure representative Elizabeth Radka, the firm treats specific populations of cancer patients in a minimally invasive way, which in effect replaces surgery.

For different kinds of cancer patients, a process known as cryoablation uses extreme cold to turn cancerous tumors into ice balls. The simple procedure requires only a local anesthetic and a needle, which is injected through the skin and guided by ultrasound to reach the cancerous growth. Liquid nitrogen at a temperature of -274 degrees Fahrenheit is then pumped in to freeze the tumor, which becomes inactive and cannot metastasize. Then the body takes over and performs its natural function, to eliminate the dead cells.

Ice Cure Medical Marketing President Tlalit Bussi Tel Tsur verifies: “The human body constantly eliminates dead cells, so once the freezing operation is performed, dead cells are eliminated in the coming days or weeks. Only a tiny scar remains inside the tissue, but on the outside, on the breast or the kidney or any part that was treated, there is no trace.”

Another advantage of this innovative treatment is the short time it takes to perform: “Most patients are treated in less than one hour, and some little tumors can be treated in ten to fifteen minutes. It’s a very fast and straightforward procedure. The patient can even go home on the same day or the day after,” says Tel Tsur.

Ice Cure devices can be used in hospitals and also in doctors’ offices. The successful technique has already been applied to treat thousands of women worldwide, including over 400 breast cancer patients in Japan. The Israeli device has also been marketed in Asia, Australia, Spain and Germany.

In clinical trials conducted in 18 hospitals in the United States, Ice Cure achieved astounding results. Using its Ice Sense 3 system, doctors performed the cryoablation procedure to 446 women patients and achieved an over 99% success rate, as only one patient experienced a recurrence of the cancer.