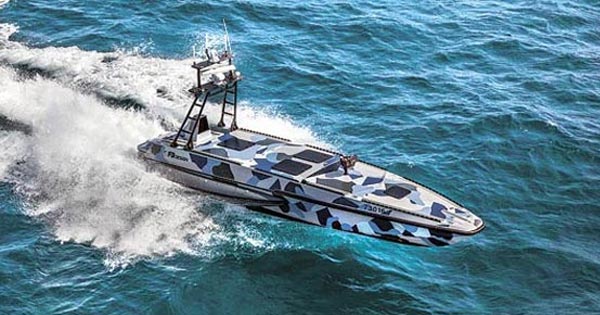 Rafael Advanced Defense Systems’ Protector Unmanned Service Vehicle (USV) is the first remote-controlled naval combat vessel to enter operational service. The Israeli -made USV is a response to maritime threats such as al Qaeda’s suicide attack against the US Navy’s Cole guided-missile destroyer in October 2000.

In operation with the IDF, two soldiers board the Protector, load the weapons system and disembark. The unmanned vessel’s long-range cameras and surveillance equipment can detect suspicious vessels in Israeli waters. Remote operators who identify threat targets can deploy the Mini-Typhoon to engage the enemy without endangering lives. For this reason, IDF sources hope that the USV, which is still a novelty in naval service, will become as common as Unmanned Aerial Vehicles (UAVs).

The Protector recently demonstrated its capabilities in a NATO exercise that was held along the shores of Israel. A NATO ship spotted a large number of hostile vessels rapidly advancing towards it in attack formation. The ship reported back to headquarters, prompting the deployment of Rafael’s Protector USV to identify the threat from a long range. An order was given to neutralize one of the threat ships, and the Protector simulated the firing of Rafael’s SPIKE EO missile.

A Rafael spokesman noted: “The demonstration illustrated some of Protector’s capabilities that can be applied in a wide range of operational scenarios. These capabilities are a significant force multiplier for naval forces, from the stage of detection, deterrence and, if necessary, neutralization of the threat, as was seen in the demonstration.”