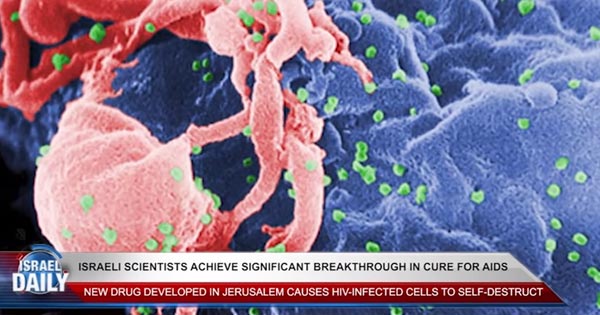 Ever since the outbreak of Acquired Immunodeficiency Syndrome (AIDS) in the early 1980s, the medical profession has been trying to develop a cure for the deadly disease that has infected 75 million people and killed around 32 million worldwide. Now there is a ray of hope as Israeli researchers at the Hebrew University in Jerusalem have developed a ground breaking new treatment that can once and for all cure the dreaded HIV virus and AIDS disease.

To date, the medical community has been aiming to treat the vile disease with a concoction of various pharmaceuticals. While this “cocktail” of combined drugs has succeeded in slowing down the progression of HIV it has failed to totally eliminate it from patients who are suffering from it. For this reason, in recent years the HIV virus has been treated as more of a chronic illness than the death sentence it was thought to be when it first broke out. However, the new advanced Israeli drug has demonstrated that it can decrease the HIV virus count in patients’ blood by as much as 97 percent just eight days after the medication is injected. The miracle component that Israeli researchers have come up with is a small type of protein called peptide that essentially induces the infected cells to self-destruct following an infusion with several copies of the virus’s DNA. This means that in effect there is no chance that the virus can resurrect itself as there won’t be any HIV cells left in the patient’s bloodstream.

The big breakthrough drug is currently being tested at the Kaplan Medical Center in Rehovot. And in the meantime, Israel is continuing its efforts to eradicate the disease altogether. The Health Ministry plans to distribute Pre-Exposure Prophylaxis (PrEP) drugs, which have proven to be effective at preventing high-risk populations from catching HIV.