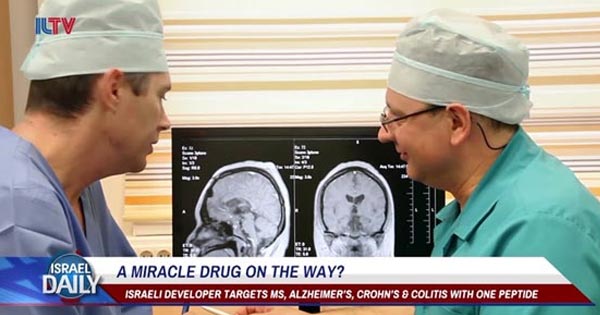 An Israeli scientist has disclosed that he is working on a groundbreaking development which may provide an antidote for three inflammatory, lethal and as yet incurable diseases, Multiple Sclerosis, Alzheimer’s and Crohn’s disease, all with one drug.

Multiple Sclerosis, the most widespread of the three, is a disabling disease of the brain and central nervous system that affects millions of people around the world. MS symptoms vary from speech and motor disorders to total disability, depending on the amount of nerve damage. Alzheimer’s is a neurodegenerative disease that lies at the root of up to 60-70% of all known cases of dementia. Causes of Alzheimer’s range from genetics to head injuries, hypertension and depression, and life expectancy following diagnosis is up to nine years. Crohn’s disease an inflammatory bowels disorder that affects different areas in the digestive system. Symptoms include abdominal pain, diarrhea, malnutrition and weight loss. All three diseases have eluded scientific researchers looking for effective treatment.

Chronic inflammable diseases may not all be terminal but they do have one thing in common: they are linked to a protein that triggers inflammation and degeneration which are symptomatic of MS, Alzheimer’s, Crohn and other disorders. Israeli Professor David Naor claims that he is on the verge of a breakthrough with a treatment called “fibemer” which targets the harmful protein with a synthetic peptide comprising an amino acid chain that can neutralize the inflammatory elements. Lab treatments using mice have so far produced amazing results, demonstrating dramatic reversals of symptoms associated with Alzheimers, MS and Rheumatoid Arthritis. Fibemer has proven to be effective where all other test treatments have failed. While tests with humans are two years and a few million dollars away, Professor Maor believes that once the inflammation is counterbalanced and controlled an actual cure can’t be far behind.