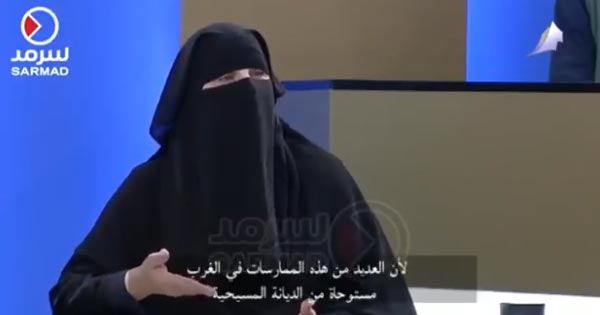 An American Muslim woman has charged that the celebration of Christmas is incompatible with the teachings of the Koran, offensive to Islam and its celebration should be unacceptable to Moslems.

Speaking to an all-male panel of traditionally clad Moslems on the Kuwaiti Sarmad electronic media network, the unidentified woman, donned in a black burqa with her head covered and most of her facial features obscured, lashed out at Christianity and the West in letter perfect English and an American accent that betrayed her long-term residence in the United States.

“Many practices from the West come from Christianity, and these celebrations actually harm us (Moslems),” she alleged. “The West is a multicultural society. There is no right and wrong, except for what the government and the people decide what is right and what is wrong.”

For clarity’s sake, the woman presented a theological argument which doesn’t resonate with Western sensibilities or American values, and certainly not with Christian beliefs. “We are a Muslim society. Our constitution is based on the Sharia, and as Muslims we believe that nobody is above God in legislating.” The woman then proceeded to lash out at Christmas with firm conviction: “Christmas, what is it? It’s not giving gifts, having fun, singing carols, it’s the celebration of the Son of God who is God Himself in flesh. So God Himself came and was given birth by Mary to create Jesus, who is God… But in the Koran, Allah said ‘He was not born, He was not procreated, He is not the son, he is not the father, there is only one God.”

The woman argued that Moslems who either accept or show their respect for Christmas are in fact, really participating in it, and absolutely implied that the celebration of Christmas is a true form of Islamophobia.