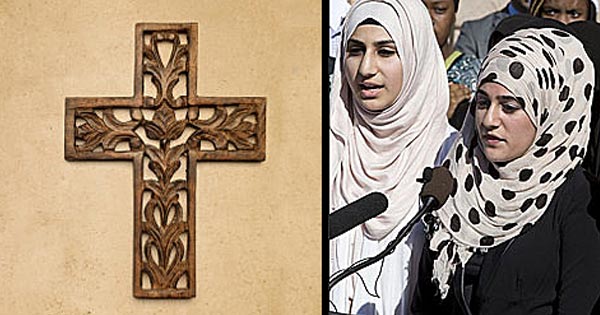 A recent Fox News report of a Moslem student protest at a Catholic institute unleashed a heated exchange between Jay Sekulow, representing the American Center for Law and Justice, and Ibrahim Rainey, an independent Muslim activist and former director of the Human Rights Department of the Muslim American Society of Freedom.

The interfaith spat erupted when Muslim students who are attending the Catholic University of America in Washington DC complained about Christian symbols in rooms where they were permitted to hold a Moslem prayer service.

Moslem students complaining about crosses in a Catholic school? A declaration of no less than “holy war in our nation’s capital” in the words of Fox reporter Sean Hannity.

The official complaint stated that CUA does not “provide space, as other universities do, for the many daily prayers that Muslim students must make, forcing them instead to find temporarily empty classrooms where they are often surrounded by Catholic symbols which are incongruous to their religion.”

Asked why a Catholic college that hangs crosses and pictures of Jesus on its walls should be a problem for members of other faiths who were accepted to its school, a somewhat flustered looking Ibrahim Rainey said “The issue here isn’t really the iconography of Jesus and crucifixes… Sean, it’s not a question of the right of the university to be Catholic, the question is, is it really accommodating to other practices?”

Jay Sukulow stormy response: There is no requirement in the Constitution that can compel a Catholic University or any institution for that matter with a faith-based connection to change its doctrines, its practices, procedures and beliefs to accommodate a student of another faith. That would be like telling Yeshiva University in New York, which might admit students from a variety of faiths, that we want you to take down the Star of David and the mezuzah on the doorway because we’re offended by it during our prayer time. You know what the answer to that is: Don’t go to school there!”

Asked if a Moslem institute would accept Jewish students or take down its own symbols to accommodate Jewish prayer, Ibrahim Rainey weakly replied: “Well, there are no Muslim universities in the United States that are not privately owned…”