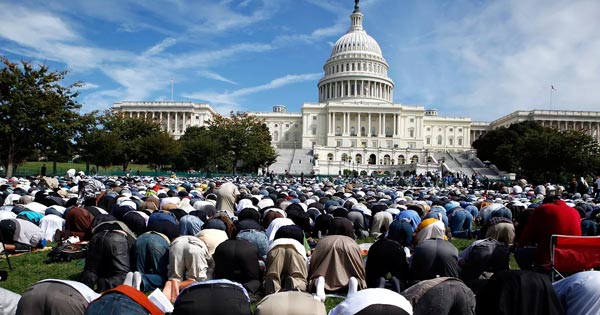 While it is politically correct to say that mainstream Muslim groups in America are moderate, some Muslim leaders masquerading as moderates are in fact extremists who tacitly support terrorism.

Islamic leaders such as Shukri Abu Baker, President of the Holy Land Foundation, and Omar Ahmad, founder and Chairman of the Council on American-Islamic Relations (CAIR) present themselves as moderates and say that terrorism is not consistent with the teachings of the Quran and the Prophet Muhammed, but avoid condemning specific terrorist groups, namely Hamas and Hizbollah. In 2000, American Muslim Council (AMC) leader Abdurahman Almoudi openly declared his support for Hamas. Almoudi, widely considered by American officials to be a moderate leader, was subsequently arrested for financing terrorism in 2004.

The FBI uncovered a document by the Muslim Brotherhood, forerunners of Hamas and the Palestinian Islamic Jihad, which sees their goals in North America as a “grand Jihad” to destroy Western civilization from within. The document calls for setting up mosques and Islamic centers “to achieve their ultimate goal, which is to destroy the miserable houses of the West so that they will be expelled and that Allah’s religion is made victorious over all other religions.”

The so-called moderate and very influential Imam Abdul Alim Musa forecasted: “Islam is coming to America not through violence, It’s coming to America the same way Christianity came to Rome…Allah said that ‘Islam will rise to its proper position in the world whether these polytheists, hypocrites, criminals, oppressors, all of them, whether they get together, still Islam will reign supreme, whether they like it or not.’” Musa even has a target date for this Islamic takeover. “On our website we talk about the Islamic state of North America in about 2050.”

In the meantime, Musa doesn’t mince words with regard to Islamic terrorists. “The Hamas and the Hizbollah, they’re good people. They don’t deserve condemnation; they deserve congratulations,” said Musa.