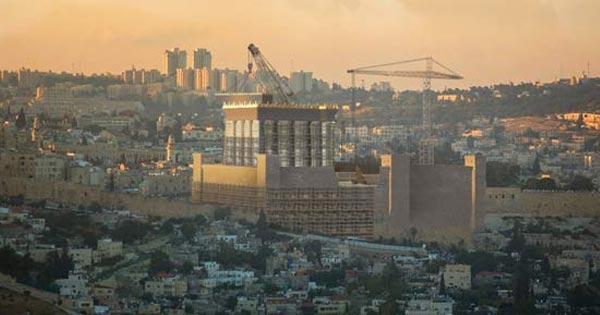 Former Israeli Minister of Housing and Construction Uri Ariel (Jewish Home) shocked many Israelis and Palestinians when in 2013 he called for the construction of the Third Temple in place of the Al-Aksa Mosque and Dome of the Rock on the Temple Mount in Jerusalem. Ariel based the Jewish historic claim on Biblical and Talmudic sources, stating that the first and second Jewish temples which were built on the latter-day site of Al Aqsa and the Dome were destroyed many years before the arrival of Islam, the Second Temple having fallen to the Romans in 70 CE. Ariel implied that in keeping with Jewish heritage and hopes for Messianic redemption the Third Temple must rise on its historic site on the Temple Mount.

Previously, Jewish Home MK Zevulun Orlev had called for a rebuild of the Beit Hamikdash, acknowledging that the forced removal of the Islamic shrines would surely incite the whole Moslem world to launch a world war. However, he rationalized that, “everything political is temporary and there is no stability.”

The ambitious plan to build a Third Temple, while popular among some religious and right-wing Jews, is considered by most Israelis to be outside Israeli mainstream thought and a threat to the fragile status quo on the Temple Mount.

Jews are currently banned from praying on the Temple Mount by the Jordanian Wakf, which administers the plaza surrounding the Al-Aqsa Mosque and Dome of the Rock. Successive Israeli governments have not challenged this ban for fear of a massive Islamic backlash.

Al-Aqsa is considered to be the third holiest site in Islam. Arab leaders, Islamic clerics and the Palestinian Authority have all denounced what they construe as a desecration of Islam, saying that Uri Ariel’s plan is part of Israel’s ongoing campaign to distort Arab and Islamic history. The Palestinians have affirmed that Jerusalem will be the capital of a future Palestinian independent state and that its heritage must remain intact.