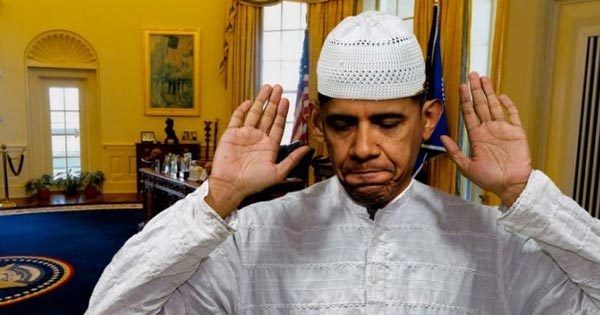 It is no secret that former US President Barak Hussein Obama comes from Muslim parentage and is proud of his Muslim heritage. He has publicly admitted: “As a boy I spent several years in Indonesia, and heard the call of the azzan at the break of dawn.” He has quoted from the Quran on numerous occasions, often prefacing remarks with “the Holy Quran teaches…” and “the Holy Quran tells us.” He has recited the Muslim call to prayer in a perfect Arabic accent, and even said that “the Muslim call to prayer is ‘the prettiest sound on earth.’” He has sung praises for Islam’s contributions to civilization, saying on separate occasions: “The Islamic faith has done so much over the centuries to shape the world” and “For many centuries, your (Islamic) art, your music, literature and innovation have made the world a better and more beautiful place.”

Obama has also raised eyebrows with his barefaced defense of Islam, saying: “The enduring faith of over a billion people is so much more that the narrow hatred of a few” and “It is important for Western countries to avoid impeding Muslim citizens from practicing religion as they see fit.”

Moreover, Obama has affronted many patriotic Americans with shocking remarks such as: “We (Americans) are no longer a Christian nation” and “if you actually took the number of Muslims Americans we’d be one of the largest Muslim countries in the world.”

Obama has been photographed and filmed wearing traditional Muslim dress, marveling at Islamic architecture during a visit to a mosque in Istanbul and even bowing before the Saudi King. This meek gesture drew fire from Briggitte Gabriel, founder of the anti-terror group “Act for America.” Gabriel charged: “He did bow to the Muslim king while he did not do it to the Queen of England. And by bowing he showed the world that I am subservient, I do bow down to you as a Muslim King, something no other president has done with Saudi Arabia.”

For these reasons, many proud Americans hold in contempt Obama’s Muslim connections.